Robots Might Be Able to Help Germany Integrate Refugees 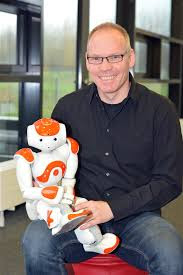 BIELEFELD, Germany — Can a robot help Germany integrate its influx of migrants? A new research project thinks the answer might be yes.

More than 1 million refugees reached Germany last year. Children represent around 25 percent of the refugees and migrants arriving in Europe, according to the International Organization for Migration.

Kopp said the project puts special focus on "children from foreign countries with an immigration background" — but that Nao is also being tested on German children learning English in kindergarten.

Liberals never stop with their sinister activities! Can't get your citizens to be traitors then get robots to do it! First the 25% "children" number is way off. This has been debunked thousands of times yet the lying MSM still uses it! Second if the MSM is going to write stories like this they need to be FORCED to have a comment section! More and more these demonic cunts are not allowing comments to stories like this because they get thousands of negative responses. In order to project the ILLUSION that they have any support, except from communists, they just don't let anyone respond! We need laws passed FORCING THEM to post comments! Third we don't want liberal robots anywhere near children! Now that people are starting to wake up to the liberal pedophile problem we need to block any other access to children they might come up with. No pervert robots either!
Posted by JE Aggas at 7:14 AM