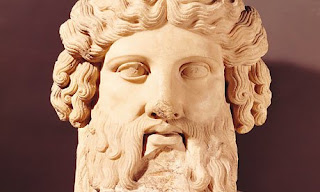 It may sound like the plot of a Dan Brown novel, but an academic at the University of Manchester claims to have cracked a mathematical and musical code in the works of Plato.

Jay Kennedy, a historian and philosopher of science, described his findings as "like opening a tomb and discovering new works by Plato."

Believing that this pattern corresponds to the 12-note musical scale widely used by Pythagoreans, Kennedy divided the texts into equal 12ths and found that "significant concepts and narrative turns" within the dialogues are generally located at their junctures. Positive concepts are lodged at the harmonious third, fourth, sixth, eight and ninth "notes", which were considered to be most harmonious with the 12th; while negative concepts are found at the more dissonant fifth, seventh, 10th and 11th.

But, friend, when you grasp the number and nature of the intervals of sound, from high to low, and the boundaries of those intervals, and how many scales arise from them, which those who came before handed down to us, their followers, to call ‘harmonies,’ and when you grasp the various qualities inhering in the motions of the body, which they said must be measured with numbers and named ‘rhythm’ and ‘metre,’ and when you apprehend that every One and Many should be so investigated, when you have grasped all of that, then you are wise ...


Nothing is so characteristic of the Pythagorean philosophy as symbolism (to
symbolikon), a kind of teaching which mixes speech and silence as in mystery
rites ... what they signify is immediately lucid and clear for those who are
accustomed to it, but dark and meaningless to the inexperienced... with the
Pythagorean symbols what seems to be affirmed is really being concealed, and
what seems to be concealed is discerned by the mind.


The practice of counting lines, ‘stichometry'...

Stichometry refers to the practice of counting lines in texts: Ancient Greeks and Romans measured the length of their books in lines, just as modern books are measured in pages. This practice was rediscovered by German and French scholars in the 19th century. Stichos is the Greek word for a 'line' of prose or poetry and the suffix '-metry' is derived from the Greek word for measurement.

The length of each line in the Iliad and Odyssey, which may have been among the first long, Greek texts written down, became the standard unit for ancient stichometry. This standard line (Normalzeile, in German) was thus as long as an epic hexameter and contained about 15 syllables or 35 Greek letters.

Stichometry existed for several reasons. Scribes were paid by the line and their fee per line was sometimes fixed by legal decree. Authors occasionally cited passages in the works of other authors by giving their approximate line number. Book buyers used total line counts to check that copied texts were complete.

The standard work on stichometry is Kurt Ohly's 1928 Stichometrische Untersuchungen which collects together the results of some fifty years of scholarly debate and research. Today, stichometry plays a small but useful role in research in fields as diverse as the history of the ancient book, papyrology, and Christian hermeneutics. 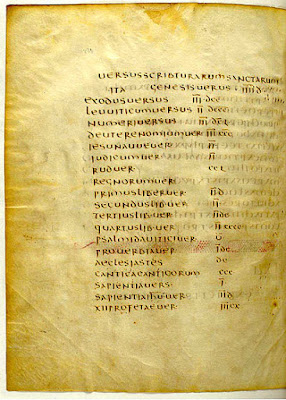 A List of Total Line Counts for Christian Texts: The title is 'Versus Scribturarum Sanctarum' or 'Lines of Holy Scriptures.' The second line says 'Genesis Versus IIIId' or 'Genesis Lines 4500.' The third line says 'Exodus Versus IIIdcc (= 3700). From the Codex Claromontanus (5th or 6th century CE), Leaf 467v, National Library

The connection between music theory and speech is later made explicit when
Alcibiades compares Socrates to a mythical musician:

And aren’t you, [Socrates,] an aulos player! You are much
more marvellous than [the satyr Marsyas]. He enchanted humans
with [musical] instruments by the power of his mouth ... You
differ from [Marsyas] only in so far as you do this ... without
instruments, by language naked and bare, [that is, by speaking
unmetrical prose]

Alcibiades here says that Socrates’ speech makes him a musician. This
makes an important concept available for interpreting Plato’s symbols: Erychimachus’
theory of harmonisation in music may apply to ordinary speech.

"The hubris of Marsyas " in the English Ordinal system equals 227

Eryximachus’s theory explains this recurrent pattern. The clusters of features
are a kind of symbol for a musical sound or note. The motion or
activity which occurs at the locations of the quarternotes but not between
them is the ‘motion’ constitutive of musical rhythm. The resumption and
cessation of the motion symbolises the beginning and end of a musical sound.
Eryximachus’ ‘harmony of high and low’ is here the ‘agreement of wise and
unwise.’ The invitation and its acceptance are a harmonisation produced in
ordinary speech.

Plato's number: Plato alludes to the fact that 216 is equal to 63, where 6 is one of the numbers representing marriage since it is the product of the female 2 and the male 3. Plato was also aware of the fact the the sum of the cubes of the 3-4-5 Pythagorean triple is equal to 216..

‘agreement of wise and unwise.’" in the English Reduction system equals 113