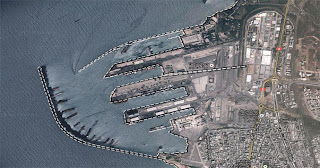 
Over 100 people are feared dead after seven blasts targeted several locations in the coastal towns of Jableh and Tartus, Syria’s Latakia province, according to media reports. The locations are close to two Russian military facilities: the Khmeimim airbase and the Tartus naval base.
Islamic State militants claimed the attacks saying via its news outlet, Amaq, that "gatherings of Alawites in Tartous and Jableh" had been targeted. The Alawites is the minority sect to which President Bashar Assad belongs.
According to Ikhbariya TV, there were up to three explosions in the coastal town of Jableh near the local railway terminal. RIA Novosti and state TV also report a fourth explosion, at the emergency unit of a local hospital.
The blasts left over 45 people dead, police sources initially told RIA. Then the joint death toll was raised to over 100.

Tartus is a city on the Mediterranean coast of Syria.
Tartus" in the English Reduction system equals 18/99/594/571 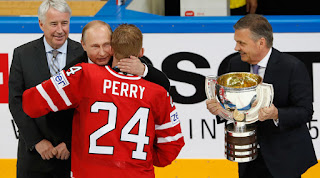 Russian President Vladimir Putin joined the top teams on the ice of the 2016 World Hockey Championship to personally congratulate them on their wins and present Canada with the cup for defeating Finland and grabbing the gold.

Putin arrived at the Moscow sports venue during the third period to watch the final stages of the game.

The History of Tartus goes back to the 2nd millennium BC when it was founded as a Phoenician colony of Aradus. The colony was known as Antaradus (from Greek "Anti-Arados → Antarados", Anti-Aradus, meaning "The town facing Arwad"). Not much remains of the Phoenician Antaradus, the mainland settlement that was linked to the more important and larger settlements of Aradus, off the shore of Tartus, and the nearby site of Amrit.

The town facing Arwad" in the English Reduction system equals 84

Muslim armies conquered Tartus under the leadership of Ayyan bin al-Samet al-Ansary in 636.

The Crusaders called the city Antartus, and also Tortosa. First captured by Raymond of Saint-Gilles, it was left in 1105 to his son Alfonso Jordan and was known as Tortosa.

In 1152, Tortosa was handed to the Knights Templar, who used it as a military headquarters.

The city of Tortosa was recaptured by Saladin in 1188, and the main Templar headquarters relocated to Cyprus. However, in Tortosa, some Templars were able to retreat into the keep, which they continued to use as a base for the next 100 years. They steadily added to its fortifications until it also fell, in 1291. Tortosa was the last outpost of the Templars on the Syrian mainland, after which they retreated to a garrison on the nearby island of Arwad, which they held for another decade.