"Get out leftist Traitor!" - German People chases Minister of Justice Heiko Maas to his Armored Mercedes 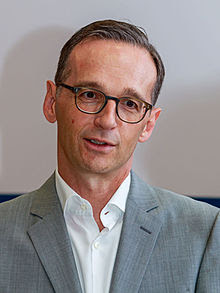 
Heiko Maas, the German Federal Minister of Justice, was unable to finish his Labor Day celebration speech on the 1st of May as he was loudly booed and chased off the stage by the German people. The people repeatedly shouted "Traitor", "Leftist Rat", "Get out!", "We are the People" and "Maas must go!", eventually getting him to cancel his speech and flee to his armored vehicle escorted by his armed bodyguards.

Maas is considered one of the biggest proponents of expanding censorship laws, demanding persecution, fines and jail-time for everybody posting "hate speech" on social media.

He also does not acknowledge the existence of the German people, backing his party, the Social Democrats, in the opinion that Europe was always made up of immigrants and Germany's only chance of redemption for the eternal guilt of World War 2 is inviting as many Muslim immigrants as possible.

His party took devastating losses in polls across the country, losing to the Alternative for Germany (AfD) by a landslide in the last state election of Saxony, where he held his speech.

Maas' party recently published plans to build 350,000 entirely new homes for "newcomers" to solve the "demographic crisis". In his speech he claimed that "the people shouting 'traitor' don't even know what's happening to them". But it appears that they know very well what is being done to them.
The German people are confused and angry about why they're told that they have to be frugal and avoid having children because of the immense cost while simultaneously working their fingers to the bones to fund a foreign invasion.

The people in the audience hence ridiculed him for claiming that the actual workers in the audience "hijack Labor Day". The hypocrisy of celebrating Labor and fair wages while his party supports the import of millions of unskilled workers is what got him chased off the stage.

Heiko Maas (born 19 September 1966) is a German SPD politician. He is Federal Minister of Justice and Consumer Protection since 17 December 2013. Before he has been the leader of the SPD group in the Saarland regional parliament since 1999.